This is an average day to day gate that you would see. I pass this gate everyday on my way to work, being the main entrance to the studio of some Rock Band (I think), they do have some very interesting themes going on.

This image has been capture right in front of the gate, i.e standing parrallel to it, thus capturing the dual sides of the Rabbit.

Also in the background is the moving image of a pedestrian.

The theme of the gate changes periodically, and I hope to keep adding more images of this gate as they change.

The Houses of Parliament 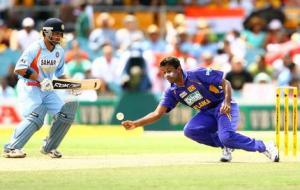 I was at a bookshop yesterday close to the Baker Street tube station in London, and whilst I was casually browsing through the books, a Pakistani man, who gave himself away by the clothes he was wearing got chatty with me and spoke to me on random things – despite my polite attempts to convey to him that I wanted to not be disturbed.

In the face of his rather interrogating demeanour, when I told him that I was a Sri Lankan student, and I am currently working between courses, he began to ask me more about Sri Lanka and its demographic distribution on ethnicity and such like.

As is inevitable when speaking about Sri Lanka, he started talking to me about Cricket and this even when I was now less inclined to be polite anymore.

He asked me, ‘you know that Mubarak, is he a Muslim ?’ referring to Jehan Mubarak, I honestly felt rather discomforted as religious politics has not really infiltrated into the Sri Lankan cricketing fabric and I am not one of those belonging to the negligible minority who analyse National cricketers by isolating them on their ethnic or religious background. I responded vaguely in the affirmative saying something like ‘yeah I guess’.

‘Anybody else?’ he asked, I rather reluctantly said ‘I think Farveez Maharoof is a Muslim’.

Then he asked me in his rather thick pseudo-Arab accent, ‘What about Hasan Tilaq Al Athni ?’ now I was really confused,first I did tell him I have never heard of such a person, and gave him a sharp look without bothering to insulate my face to conceal the bewilderment, only to realise after a few awkward seconds looking at him straight in the eyes that he was actually referring to this good old Sri Lankan bloke shown here.

So much for Muslim Sri Lankan Cricketers heh!