As you may already know, Israel yesterday attacked a ship consisting of innocent civilians which was carrying aid and much needed relief supplies to the Gaza strip. 19 people died according to most reports and much more injured.

It may be argued that the flotilla going to Gaza was rather naïve, and that Israel would not have let it pass anyway. I think it’s a win-win situation.
If they had reached Gaza and much aid was given to them it will ease a lot of the suffering of the people of Gaza, and Israel will have been humiliated.

Now that this has taken place, a senior al Jazeera political analyst was saying yesterday that Turkey was Israel’s closest Muslim ally. Israel depended on Turkey ever so much on a lot of issues, and this is the last straw with Israel since there has been a lot of friction between the two nations. And the only way Israel can mend fences with turkey will be to lift the siege in Gaza! Now that’s even better than the flotilla reaching Gaza noh? With the siege lifted, international aid, Red Cross, UN humanitarian forces can go to Gaza freely! As much as my thoughts are with the families of the people that died, I think this is a win-win situation.

The Turkish flotilla aimed to replicate the Exodus story or, more precisely, to define the global image of Israel in the same way the Zionists defined the image that they wanted to project. As with the Zionist portrayal of the situation in 1947, the Gaza situation is far more complicated than as portrayed by the Palestinians. The moral question is also far more ambiguous. But as in 1947, when the Zionist portrayal was not intended to be a scholarly analysis of the situation but a political weapon designed to define perceptions, the Turkish flotilla was not designed to carry out a moral inquest.

Instead, the flotilla was designed to achieve two ends. The first is to divide Israel and Western governments by shifting public opinion against Israel. The second is to create a political crisis inside Israel between those who feel that Israel’s increasing isolation over the Gaza issue is dangerous versus those who think any weakening of resolve is dangerous. (link)

Turkey I hear, is already planning to send more ships to Israel flanked by the Turkish navy.

There was an emergency protest march organised in London yesterday and within hours after waking up to the news the people had decided to convene outside Downing Street in Westminster and then proceed in a very peaceful and equal vocal march towards the Israeli embassy at south Kensington.

I have never been to a protest before and this was my first, and I am damn glad I went to experience firsthand the solidarity local people have with the suffering of the Palestinian people irrespective of what their governments do.
Deputy prime minister of Britain Nick Clegg said before the elections that there should be an arms embargo on Israeli, should be interesting how he reacts to this.

Some of the photographs I took at the protests yesterday. 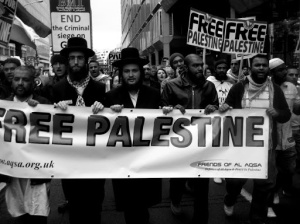 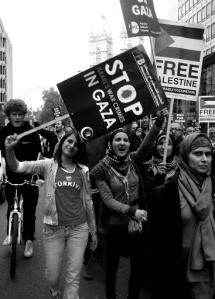 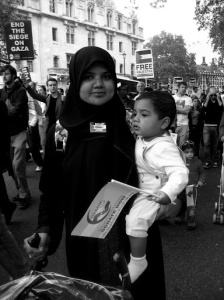